A personal highlight during the week at the Prix in 2019 was certainly our interview with Dr. Carlo Bagutti, the head of the medical team. We sat together and talked all things health policy, social media, dance and athleticism, nutrition and many more topics. With this conversation, you will find a never before published insight into the Prix de Lausanne’s policy, and their care and concern for young dancers’ wellbeing. 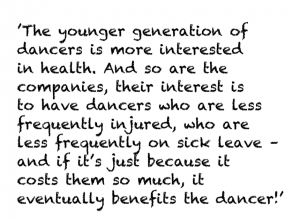 How Dr. Bagutti came to the Prix

Having worked with Swiss athletes all his life, in 1996, Dr Bagutti was asked to examine a young male dancer competing at the Prix. This dancer had injured his wrist shortly before the competition and was wearing a bandage at this time but was obviously still in a lot of pain. An X-ray at Bagutti’s clinic would show a fractured wrist, and surgery followed suit. Bagutti’s admiration for dancers grew immensely when this boy continued to dance during the competition (his wrist externally fixated) and even won! Since then, Dr. Bagutti has not missed a single competition.

As much as Dr. Bagutti was impressed by the young dancer’s determination to compete despite the broken wrist, he saw a lot of issues during his time backstage at the Prix, most of them being nutritional concerns. Again, the time spent treating athletes was very helpful here as he knew how many problems under-eating can cause in athletes, not only hindering them to perform at maximum power but also problems associated with impaired short- and long-term health. Unparalleled at this time, the organizing committee agreed to set up a health policy that is unique for a competition until today.

The importance of this health policy is very well exemplified, and with the help of his story Bagutti told us: ’I felt the health policy needed to be something that had a scientific base AND could be implemented into schools, companies, and could even be used by every single dancer. We want to raise awareness because we have seen so many candidates not knowing, or maybe even not caring about their health problems; not now, not in the future, all they want is to come to Lausanne and compete. We have heard this more than once: ”I don’t care about my health, I want to take part in the Prix de Lausanne, I don’t care about anything else.“

Pressure on the young dancers

Social media can be both a blessing and a curse. However, in Bagutti’s experience, it’s not only social media but also often families and teachers putting so much pressure on the candidates that their health derails. A positive and nurturing environment for young dancers cannot be emphasized enough. Interestingly, in his experience, it is often much easier to discuss health concerns with the young dancers than it is with their families and/or teachers.

Every year, the medical team has to schedule meetings with a dancer due to health concerns. Those meeting are usually arranged for the dancers but accompanied by their parents and preferably also teachers/school directors. It has proven extremely helpful to also invite a famous dancer of the same nationality as the candidate, as both the influence and understanding of cultural background of the candidate is immense. With this approach, the medical  team has had the best results – they do not feel what is said is ’going in one ear and out the other’ but the entire meeting ends with an impactful and mutual understanding.

When asked if there are complaints, Bagutti laughed ’Yes, of course! And while we see every candidate as a unique individual, some data cannot be belied.’ During the competition, it is about 5-10% (max) of the candidates in which his team needs to see and check upon.

One of Bagutti’s main concerns is the environment young dancers find themselves in. He acknowledges that there are still places today where students are pulled out of class for weigh-ins on plain scales which say nothing about their body composition.

Where feelings of shame and failure are often associated with such weigh-ins. where progress in the knowledge about a dancer’s health is ignored and where it is passed on how life was decades ago.

Carlo Bagutti has a strong belief that the younger generation of dancers are willing to take care of their physical and mental health more than any other generation before.

’Our health policy aims at making young dancers understand how they can become (or stay) so healthy that they can perform at maximum power and enjoy a long career.’

Our last point to discuss was the nutritional advice the health policy includes. According to Bagutti’s experience, veganism has been on the surge but, unfortunately, is one major drive for under-fueling in dancers and athletes. (Please read also The Planetary Diet in this issue, you will find the related science on whether or not to use dairy products.) For anyone struggling to meet their daily necessary nutrient intake (this does not equal total calories but rather being calcium-deficient, for example), a diet that meets the body’s needs is desirable- and this may include dairy. First comes the individual, then the application of what science has found to be applicable for the general population. When we read about diets, it is always generalized and not individualized. Bagutti’s philosophy goes absolutely well with the concept introduced here: Any diet should be based on genuinely healthy food. Consideration of ethical or environmental aspects may play a role in people wanting to change their diets – and that is welcome; as long as the individuals needs are met. Nobody is helped if a person suffers from osteoporosis at the age of 35 due to insufficient nutrient intake during earlier years. A diet can only be as good as long as it is helping develop a healthy body and mind. Bagutti himself is not against veganism in general – but the application must fit in with the dancer’s life. He is quite aware of the action the world has to take in order to save the planet and reduce climate change.

About the stark discrepancy between the dance world and the ’normal’ world, he says:

”These days, every single day someone comes up with an idea of a special diet, the ultimate weightless-diet or the like. And especially the younger dancers are really confused with all the information and claims, ending up not knowing what to do. Just last week, I saw a kid after class with a nutritionist, who was being taught about how to not become overweight/obese – obviously, due to the majority of the world struggling with being overweight, obese and type 2 diabetic-  and so these kids learned how to avoid carbs! This kid in particular understood that he was already at risk of becoming obese and put himself on a diet! This is a good example of well-meant messages being delivered in an entirely inappropriate way!”